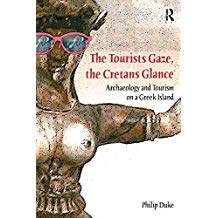 This was one my last “academic” books. I have always been intrigued by how the public sees the archaeological past and what version of it they consume (while, obviously, the past only happened once, what historians and archaeologists choose to study and what they present to the public means that multiple versions of the past are possible.) The island of Crete in the southern Aegean is home to one of the most impressive ancient civilizations in the world, the Minoan. The Greek tourist authorities actively sell the Minoan past as one of the island’s greatest tourist attractions. Certainly the remains of their “palaces” are very impressive but many tourists only visit a couple of the sites – principally Knossos – and I was curious to find out what tourists “took away” from their site visits as well as their visit to museums. My conclusion – baldly put – was that the ruins of the upper classes and the beautiful artifacts their excavators found in them was all that was important. The remains of, say, the lower classes were glossed over as unimportant. This has important consequences for how we view class relations in our own society, given that Minoan culture is often portrayed as the origin of all subsequent European civilization.

The book was published by Left Coast Press in 2007 and is available on Amazon.